The Advisory Electricity Rate, and the cost of electricity for EVs

The cost of electricity is rising, and it means that for electric vehicles, businesses need to work out a fair way to reimburse drivers. In this blog, we look at the issues and how to solve them.

With the ongoing energy crisis, the cost of electricity has risen sharply. The Office for National Statistics reports that by early February 2022, electricity prices had risen 18.8% in the previous 12 months.

The increase was the result of a record rise in global energy prices over the last six months, with wholesale prices quadrupling in the last year.

Unfortunately, this was not the end of price rises. The energy price cap, updated twice a year, and intended to ensure homeowners’ costs do not rise too quickly, has been revised upwards for the second time in a row because of increased energy costs.

This, of course, has a financial impact on the cost of charging an electric vehicle. According to British Gas, in late March 2022 the average price of electricity stood at around 28p per kWh, which means a driver would pay £19.60 to fully charge a 70kwh EV, when a year ago, at 20p per kWh, it cost £14.

Among these rises however, one figure has not changed: the Advisory Electricity Rate.

What is the AER?

Employers can use the AER when they are either reimbursing employees for business travel in their company cars, or need employees to repay the cost of electricity used for private travel.

Set quarterly, the AER has remained at 5p per mile since November 2021, having previously been set at 4p following its introduction in 2018.

Quite simply, 5p per mile does not reflect the real world costs of charging an EV. Take the example of this driver in an EV with a 70 kWh battery, doing 12,000 business miles a year, all charged from home, and achieving an average economy of 3.3 miles per kWh. 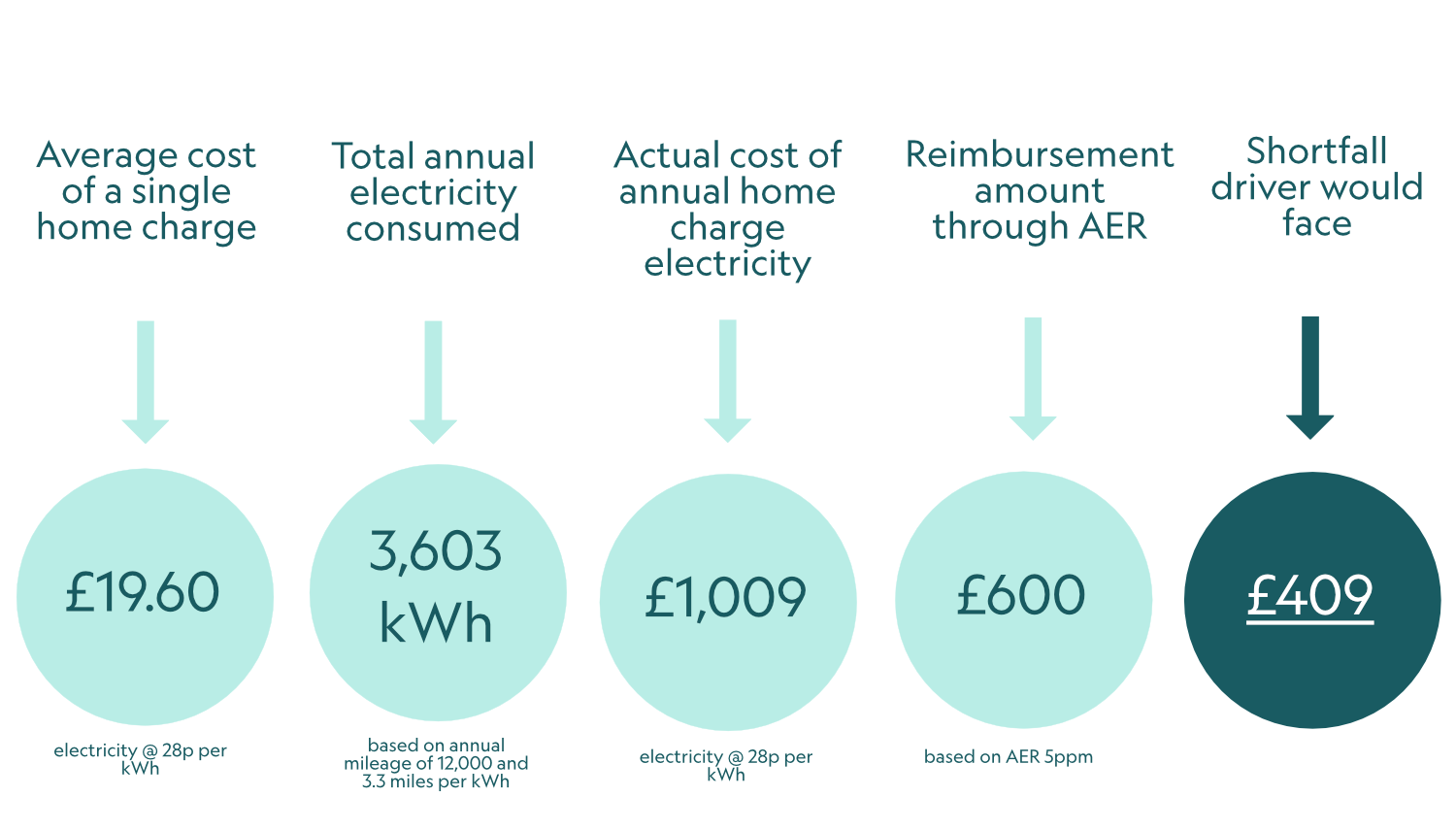 It’s worth noting that with home prices generally the cheapest source of energy, this example is the lower end of a loss to the driver, and energy prices are likely to go higher still. Some home tariffs are already hitting 40p per kWh, which would see this loss increase by a further third.

With public chargers, the costs can be significantly more expensive, depending on network, speed and location.

If, for example, the same driver used a 50kW public rapid charger, at 50p per kWh, for half of their required charging, the overall bill would rise to £1,405.

Yet the amount they could claim through the AER rate would remain the same, meaning they are now £805 out of pocket.

Even if there was not an energy price crisis, the AER will never be fit for purpose because it is a flat rate for paying drivers who all may have differing home energy tariffs or paying varying prices for on-road charging.

Should you calculate your own reimbursement?

Not surprisingly, drivers might resent doing business miles that are personally costing them money. So you could ignore the AER and come up with a figure you feel is more reasonable and accurate.

However, you should be very careful when doing this. You must be able to provide evidence to HMRC that you are paying the actual cost of the energy and no more or you will incur, at least, Benefit-in-Kind tax charges on the reimbursement. Or you might even end up with an inspection from the taxman.

One of the issues with doing it yourself is that in order to show you’ve paid the actual cost of an employee’s energy, you’ll need a record of what they each pay for their domestic energy. And then you’ll have to keep track of it, which is complicated enough at the best of times – let alone in this period of volatile energy prices. 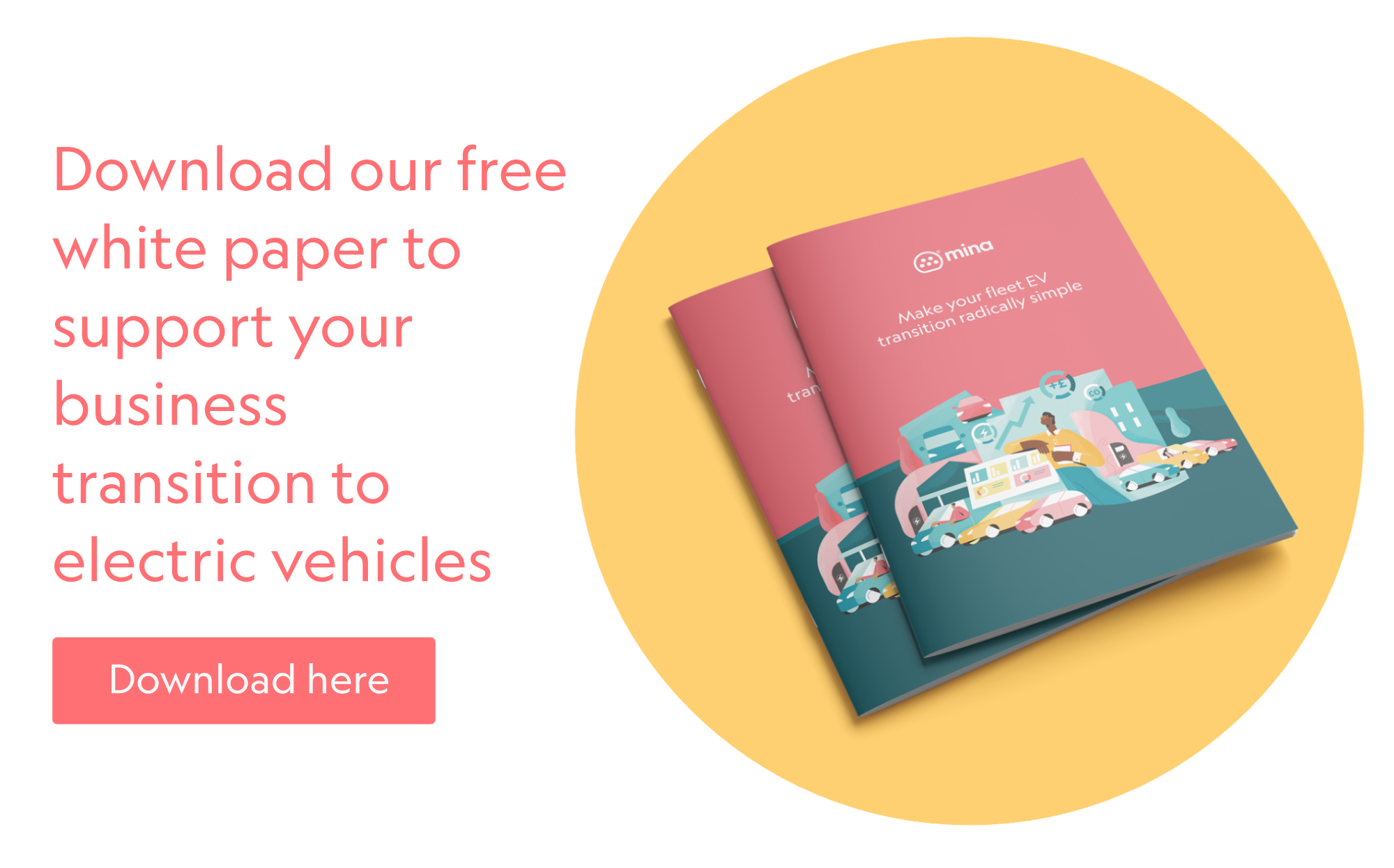 Another issue with reclaiming the cost of home charging is ‘bill shock’. Generally, when an employee first gets an EV and starts plugging it in at home, their direct debit amount is unaffected. It isn’t until months down the line that their increased consumption is taken into account that their direct debit amount increases. By this time, it’s probably fair to say the reimbursement from the employer, directly through payroll, has been spent by the driver.

We call this ‘bill shock’. But it doesn’t have to happen. At Mina, we pay the energy supplier directly so your employees are protected from this potentially awkward transition to an electric vehicle.

Cutting down on fraud

There is another problem that could cause you headaches: fraud. With the disparity between the AER and actual costs, employees could be tempted to massage their claims and exaggerate their mileage to try and claw back the shortage.

It then becomes another management problem that will need dealing with - and one that could be avoided if you put in place a solution to pay employees accurately.

At Mina, we can help you manage all these issues. Through our Homecharge solution, we’re able to monitor your employees’ individual energy tariffs and suppliers automatically, ensuring you’re paying accurate costs. These costs are then paid directly to each driver’s energy supplier, which completely eliminates ‘bill shock’.

Businesses receive one monthly invoice which covers the fleet’s entire charging activity whether at charges have occured at home, public or the workplace, saving costs and administration on payroll reimbursement and expense claims.

Our solution means you can:

Speak to our team to learn more about how we can help your fleet save time, money and essentially pay for your drivers' charging costs accurately.